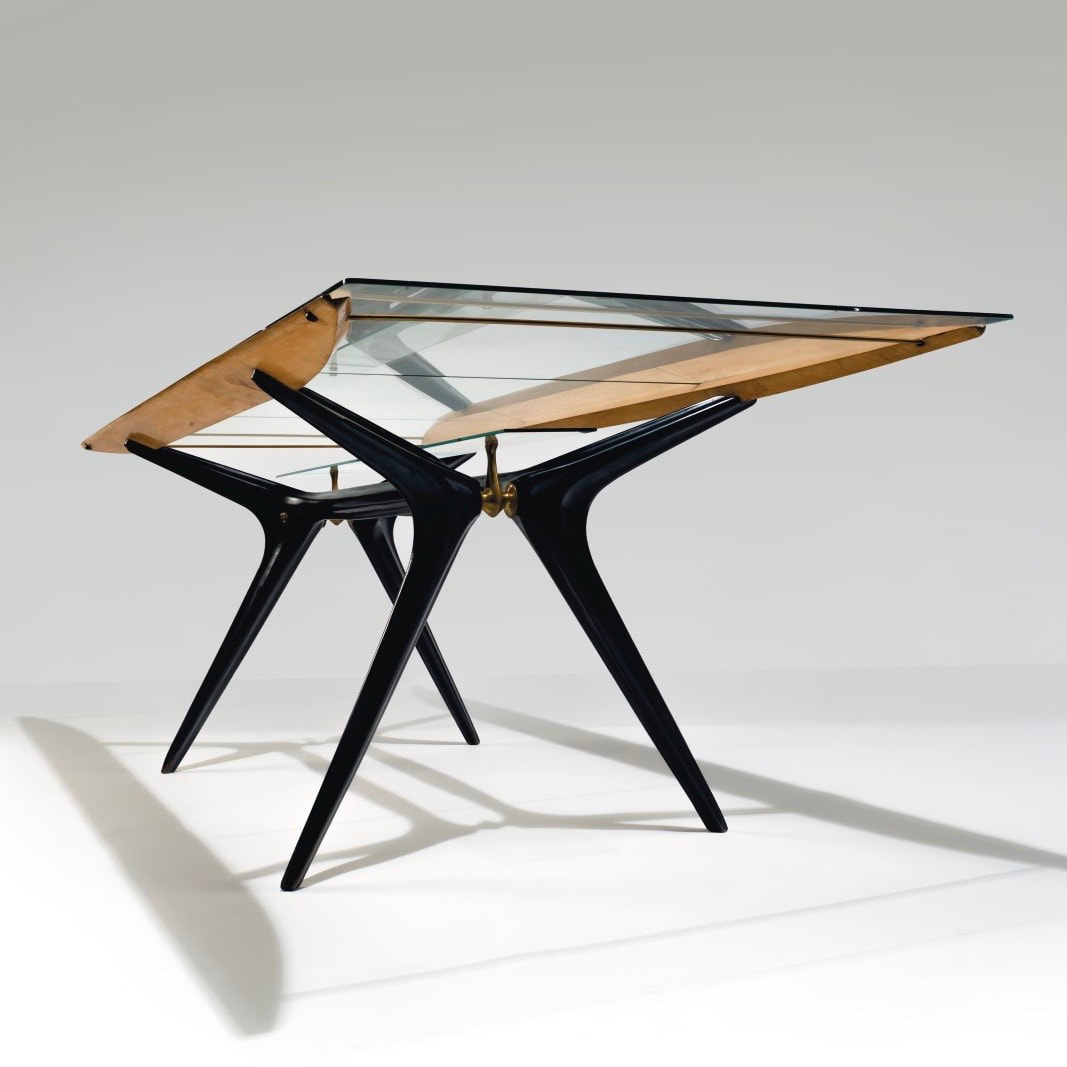 For his concluding event as Christie’s’ chief International Design Senior Specialist, Simon Andrews, the man who has helped to guide the design department for over two decades, and who has been considered the ultimate expert on historical modern design, has co-curated an extraordinary sale entitled ‘Thinking Italian Art & Design.’ (October 22).

This sale, which includes masterpieces of art and design, features one lot which will become the highlight of this season, and possible of the seasons to come. Leading the design section is a dining suite, which will be remembered as one of the rarest, most desired object to appear in the design market. Designed by Carlo Mollino (1905-73), the suite came to mark a shining moment in the career of the brilliant Italian designer, and a defining time in shaping his visual language. It was made for an interior in Turin, which Mollino created for the perfect clients.

It was during WWII, and Italy was deeply involved in the War. Turin, home of industries engaging in war production, suffered raids by the Allied air forces and was heavily damaged, when Mollino began working on the home of Ada and Cesare Minola, situated in a 1920s residential building in his hometown. It is here, in this iconic interior, one of the most celebrated spaces of the 20th century, that Mollino came to shape his sensual, sculptural, and fluid signature vocabulary, creating the embodiment of the gesamtkunstwerk, ‘total work of art.’ In fact, every piece of furniture created for this commission has brought to a tremendous attention when surfacing the market in recent years, each considered a rare object of desire by the world’s best design and art collectors. Look, for example at the the lounge chair, one of two, originally created for the living room, sold by Christie’s under Andrews in 2007, fetching $881,000; it is still holding the world record price for an upholstered chair by Mollino.

Reading the essay by Simon Andrews in the Christie’s catalogue, we learn that Mollino, and Cesare had attended the same local high-school. While the project was completed in 1946, it was in the following years that Ada Minola (1912-83) had become not only a successful jewelry designer, but also a member of the Italian avant-garde. As a gallery owner, she represented Lucio Fontana, Gio & Arnaldo Pomodoro, Anton Tapies, and Miguel Berrocal as well as the radical Japanese Gutai Group, and her home represented the epitome of great taste for the surreal and the modern.

The dining area, we can clearly see in the historic photograph (taken by Also Ballo in 1974, and published in the book ‘Styles of Living by Casa Vogue in 1985, but not shown here) was elevated by a platform above the living area, in creating a sense of intimacy and separation. The dining table with a clear glass top, typical to dining tables created by Mollino in the 40s, is particular sculptural; the chairs, upholstered in sea-green leather, bring a sense of nature into the urban space. The interior scheme remained intact until 1983, and while most of the pieces were dispersed, this dining suite has remained preserved with the family. It is the first time ever that it will be revealed for public view, and in different times, I would have jumped in a plane to visit the exhibition in London, to see in person this breathtaking piece of furniture, which most likely will go into a private home and will be never seen again, a testimony to the greatness of Carlo Mollino. 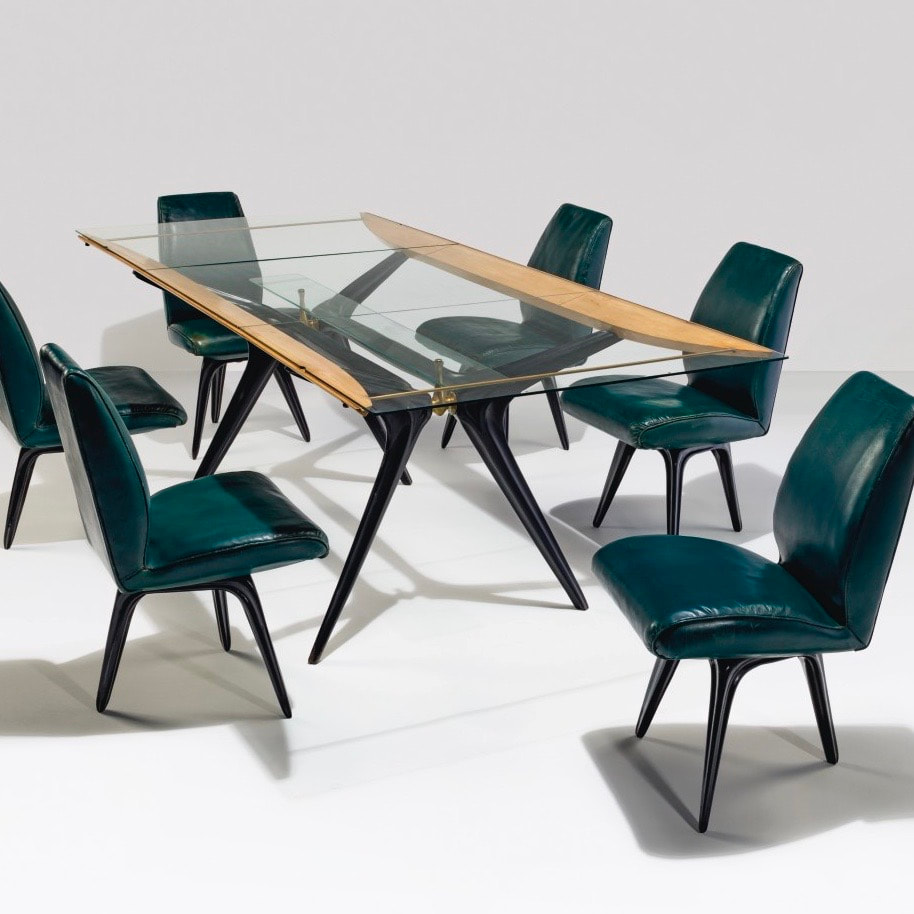 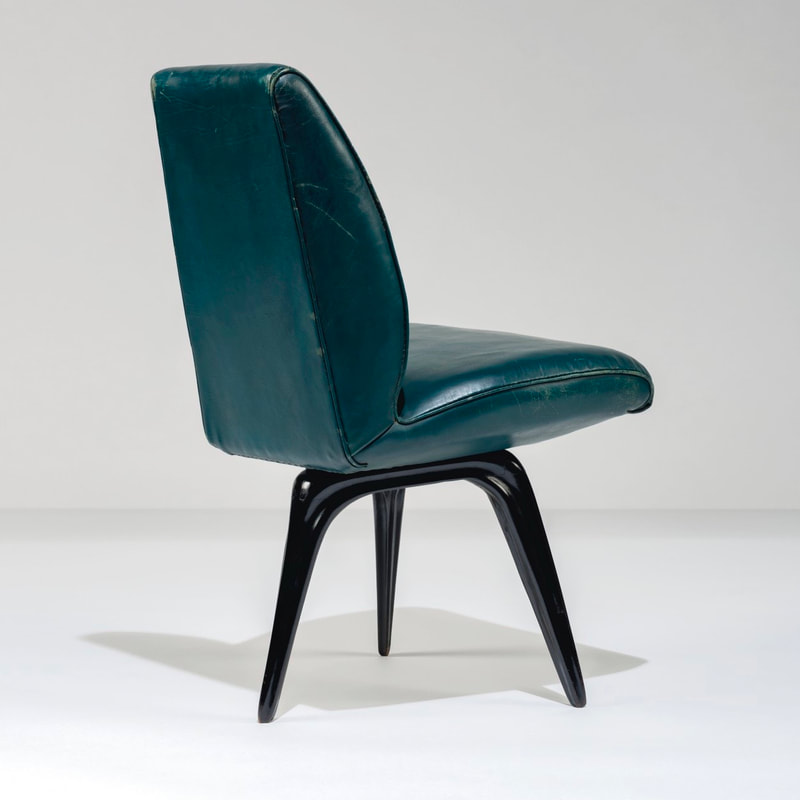 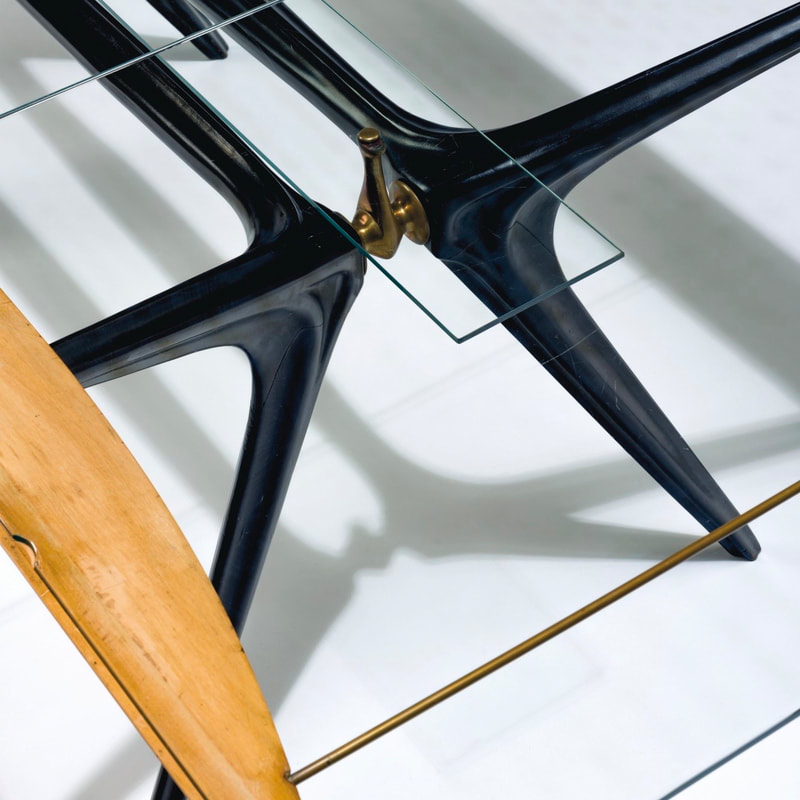